You might have guessed by now that I have an interest in food security. I also have a minor passion for bees and if you follow me on Instagram you’ll see my (sometimes clumsy) attempts to capture pictures of the busy little things on my smart phone. I have a zillion of them in my garden and I’m happy to hang out with them whenever I can, visiting hives wherever the opportunity presents itself, both locally, on Kangaroo Island, and in my further travels when recently I was able to get to meet some international bees on my trip to Canada.

Bees are an imperative part of our food chain, pollinating an estimated 1/3 of the human food supply, and without them we will all be in very dire straits. Most attract pollen to their fuzz with an electrostatic charge, others are specialised to collect the nutritious floral oils produced by some plants and even fewer are a group of native bees in New Zealand which have evolved to open the flower buds of a indigenous plant which cannot flower without their help. However they do their job, we can’t get by without them, so I was excited to be able to look at two very different apiaries when in British Columbia a couple of months ago, one of which was on Vancouver Island and the other, surprisingly, in the centre of busy, downtown Vancouver.

Tugwell Creek Honey Farm and Meadery hides behind a glorious garden, nestled into the side of a hill on Vancouver Island, not far from the charming seaside town of Sooke.  A fermented honey wine, mead is probably the oldest known fermented beverage and Bob Liptrot combines his 43 years of beekeeping experience and 25 years of mead-making skills to perfection in this award-winning winery and fascinating tourist destination. Vancouver Island born and raised, Bob has had a passion for bees since he was a very young boy, learning the ropes by helping a neighbour from the time he was 6 years of age. He has a Masters Degree in Entomology and, after experimenting with mead for 25 years, registered Tugwell Creek as British Columbia’s first meadery in 2003.

So far, Canada has managed to mostly escape the ravages of Colony Collapse Disorder that plague the United States. The European Honey Bee is the most common bee used in honey production, but British Columbia alone has an astonishing 2,000 species of native bees and Bob has somewhere between 100-150 bee colonies producing 10,000-12,000 litres of honey per annum. Keeping his hives within a 20 km circumference of his farm, Bob’s bees forage on wild feed and the honey is combined with locally grown berries to produce his hand-crafted meads.

Prior to my visit to Tugwell Creek Farm, my experience of mead had been limited to the one tasting experience I had about 25 years ago at a McLaren Vale meadery, so I was utterly gobsmacked by the sophistication and subtlety I found in the wines I tasted here.  Using traditional recipes and local fruits such as apples, berries, quinces and (of course) maple syrup Bob produces a range of delicious wines that I only wish I could get here in Australia. Of course, simply by virtue of the nature of artisan, hand-made products that is not going to happen – and neither it should. Tugwell Creek Honey Farm and Meadery is open for tastings, guided and self-guided tours, but watch out – I noticed particularly serious looking electric fences around the bee-hives and, on inquiring, was told it was to stop the bears from stealing the honey! 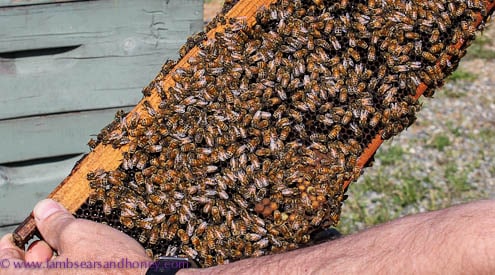 Bears are never a problem at the next apiary I visited. Tucked up on the roof of the Fairmont Waterfront Hotel, Vancouver, these urban beehives have one of the best views in the world, in my humble opinion.  I adore Fairmont hotels and have stayed in them regularly (at my own expense, this is not sponsored gushing) and when I found out that some of them keep beehives I just had to visit them.

The Fairmont chain was a very early adopter of sustainable best practices and originated their Green Partnership Program back in 1990. They have assumed a variety of practices to minimise their impact and to contribute to ongoing environmental efforts worldwide, including maintaining beehives on 14 of their hotels. The Fairmont Waterfront obtained their first beehives in 2008 and have 6 hives with over 100,000 bees per hive. They also maintain another 19-20 hives on the Fairmont Vancouver Airport Hotel to help cope with the demand for their honey – the production of which topped over 2,100 kilos last year.

The bees are kept on the pool-level roof, as the very top roof would be far too high for them to survive.  For quite some time they were maintained by the hotel’s ex sous chef who was a bee-keeper, but since he has moved on they are overseen by a commercial honey bee company, with their day to day management supervised by Michael King, the Health and Safety Manager at the hotel.The hives are placed on the roof in spring-time and kept there through the summer and early autumn until the winter chill becomes a danger to the bees, when they are moved to shelter.

Michael took me for a wander through the bee’s 2,100 square foot rooftop garden which has been planted with flowers, herbs, vegetables and fruit trees. The garden is a wonderful resource for fresh produce for the hotel and a very special place for the lucky guests whose rooms look out onto it. There is no restriction to access to the garden for these guests, although they have to be prepared to share it with the bees.

The bees, in turn, share their honey with the hotel guests where it is available in and with a very special, very local afternoon tea. I was deliriously happy sipping on one of the 12  teas on offer as I inhaled the delicious honey scones, bannock and lemon thyme cake pops, all served with little pots of this special urban honey – and all of which are just more reasons to encourage and promote the benefits of bee-keeping everywhere.

Lambs’ Ears and Honey was a guest of the Canadian Tourism Commission and Tourism Victoria.